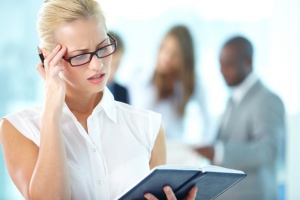 An associate in a small firm reached out to me because she was having difficulty after only two years in practice.  She worked for a partner whom she described as “really smart”.  She said that the partner expected her to know a lot more than she did.  When she asked for help, she was criticized for asking.  No matter how hard she tried, she only received negative feedback.  She felt like she just couldn’t win, no matter what she did.  I knew the partner she worked for to have a very difficult personality, so none of what the associate recounted to me was surprising.

This kind of working relationship would be difficult for anyone, but it was an especially jarring experience for a young woman who was used to being praised for her efforts.  She had always done well in school and her teachers and professors had always liked her and she found the negative criticism disorienting.  She was – in fact – a competent attorney.  Unfortunately, this associate’s experience is all too common and accounts for the loss of incredibly competent hard-working people from the legal profession.

At some point, regardless of our field of work, just about every one of us will be told by someone we consider “really smart” or more experienced than us that we simply don’t measure up.  Those new to a work environment feel the most vulnerable and are therefore most susceptible to self-doubt as a result.

When we receive feedback, it should always be considered.  However, it is important to distinguish between well-meaning constructive criticism motivated by another’s need to support us, from destructive criticism motivated by another’s need to attack us.  Some feel that a surefire way to get ahead or to maintain a position of power, is to attack those around them.

Here is the best career advice I ever received, which I imparted to the associate: don’t succumb to self-doubt.  Once the associate was able to look past the partner’s image as a “really smart” and respected member of our field of law, she realized that the partner’s behavior was adversarial toward her, rather than supportive.  She then became clear that she should not take the partner’s “advice” personally.  Her discernment of the partner’s motivations enabled her to regroup and remind herself of her own considerable abilities. She was “really smart”, too.

Once you’ve learned a valuable lesson, there is no turning back.  The associate was able to discern other people’s motivations, so that she could continue confidently on her chosen career path, avoiding destructive criticizers along the way.  She was able to take a step back and appreciate how she had learned a very valuable lesson from a difficult situation – a realization that gave her the confidence and resilience to handle any other difficult situations that would come her way.