Why I am in law school

By • June 11, 2007•Sexism, Sexual Harassment, and Other Forms of Discrimination 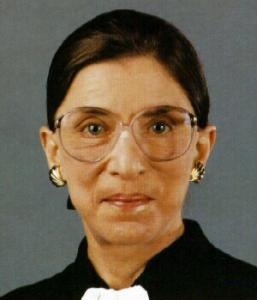 I am in law school because Justice Ruth Bader Ginsberg will not live forever. Thanks to Justice Kennedy and his paternalistic majority opinion in Carhart v. Gonzales, women are now assigned to our appropriate role in society as incubators. The Carhart opinion, intended to protect me and to ensure that I don't regret any of my reproductive decisions, rendered me a second class citizen.

The Carhart opinion, authored by a man struggling to come out from behind the shadow of Sandra Day O'Connor, sounds a little bitter toward women. Kennedy was joined by a chorus of four other Catholic men, all appointed to the Supreme Court by presidents more beholden to the religious right than to their own ideology of personal responsibility and small government. For three decades, the court's insistence on a health exception to any statute restricting abortion has reiterated a core tenet--that we as a nation value the women's health over all other compelling state interests. In a single opinion, five men erased over 30 years of precedent that women have relied upon to plan their lives. Though I was moved by Justice Ginsberg's articulate and eloquent dissent, she is in the ideological minority of the court and she is not getting any younger.

I am in law school because rape section of the Model Penal Code (MPC) must be revised! In theory, the MPC contains model language that lawmakers and judges use to reshape our criminal laws. Yet the MPC tells us that a man who forces a woman to have sex against her will is not criminally liable if she is his wife. Even state legislatures, which are often laboratories for bad legislation, recognize that this way of thinking is Neanderthal. The MPC also provides an affirmative defense when the evidence demonstrates that the victim is sexually promiscuous. My bright and savvy criminal law professor swiftly dismissed the MPC at the start of our class discussions about rape. She quite emphatically noted that it is outdated, not to be used in our analysis, and generally horrible. Yet the fact pattern for her final exam involved a defendant who lied to her husband when caught with another man and accused her lover of rape so that her husband would not think she was unfaithful.

Justice Ginsberg did not get to the Supreme Court alone. She was appointed by a president that we elected as a nation, and confirmed by Senators we elected from our home states. But changing the lay of the land requires much more than simply increasing the number of women lawmakers, judges, or registered voters. More women in law school means more women in law firms--breaking the glass ceiling, making partner on their own terms, and insisting on family friendly policies. It means more women dispelling the myth that being a partner in a law firm and being a wife and a mother are incompatible.

When I ask male attorneys why there are so few women who make partner at their firm, they earnestly explain that many women choose to leave. They believe it is not a result of discrimination, or deeply entrenched systems that keep women and minorities out.--women simply choose sippy cups and soccer games over billable hours. Women say they leave law firms because they don't need six figure salaries and 80-hour workweeks to consider themselves successful in life. Either way--the more women who enter the profession, the more likely we are to change the rules.

This summer, I am employed as a clerk at Texas Rio Grande Legal Aid (TRLA) in family law and housing. Most people associate Legal Aid with dedicated attorneys who fight the good fight every day for people who would not otherwise be able to afford legal representation in consumer law, family law, housing, public benefits, and labor law. However, many do not realize Legal Aid's contribution to ending domestic violence. Though Legal Aid is not typically associated with women's rights, their family law attorneys handle a staggering number of domestic violence cases and, sadly, turn away hundreds every year. Even with 105 staff attorneys, there are more than 12,000 income-eligible residents for every one attorney in our 68-county service area. TRLA may turn away as many as 600 victims of violence who request protective orders in a year. Yet recent studies have demonstrated that the only public service that reduces family violence in the long term is women's access to legal aid. My clerkship at Legal Aid has become my crash course in domestic violence.

Prior to law school, I worked for Planned Parenthood of the Texas Capital Region for nine years, where I served as the Director of Public Affairs. I lobbied the Texas Legislature on behalf of 25,000 uninsured Texas women, mobilized a new generation of activists to support reproductive rights, conducted hundreds of media interviews, and negotiated media buys. Because I came from a career in women's rights, my colleagues assume I have a base of knowledge in domestic violence. Though we always facilitated relationships with local shelters and advocates for clients who needed that service, abuse is not the typical experience Planned Parenthood clients have in common--the one thing they tend to have in common is being uninsured. Although I always understood domestic violence on an intellectual level and I have always supported it being a legislative priority and an issue deserving increased attention from decisionmakers, I never truly understood the scope of the problem until now.

I am in law school because women in Texas need someone to go to bat for them and take on red-state institutions of power, politics, and law. Ms. JD's board of directors and advisory committee members all hail from impressive institutions--but there's not a red state among them. I encourage you to walk the walk of inclusiveness and fund this red-state feminist for the summer.

Ms. JD is a nonprofit, nonpartisan 501(c)(3) that does not engage in political activity. This essay was submitted to us as part of a public-interest scholarship competition. Our organization does include officers and directors with red-state politics and red-state hometowns, and we have more positions to fill. Contact us for more information or to get involved!