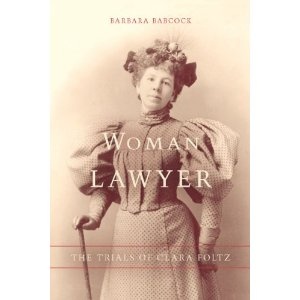 This Summer, I am finally getting to a book that's been on my to-read list for months, ever since it was sent to me as a birthday gift from fellow Writer in Residence Jen Ward. The book is Woman Lawyer: The Trials of Clara Foltz by Barbara Babcock. Here's the synopsis:

Woman Lawyer tells the story of Clara Foltz, the first woman admitted to the California Bar. Famous in her time as a public intellectual, leader of the women's movement, and legal reformer, Foltz faced terrific prejudice and well-organized opposition to women lawyers as she tried cases in front of all-male juries, raised five children as a single mother, and stumped for political candidates. She was the first to propose the creation of a public defender to balance the public prosecutor. Woman Lawyer uncovers the legal reforms and societal contributions of a woman celebrated in her day, but lost to history until now. It casts new light on the turbulent history and politics of California in a period of phenomenal growth and highlights the interconnection of the suffragists and other movements for civil rights and legal reforms.

The author is a First Women, herself, having served as the first director of the Public Defender Service in Washington D.C. and appointed as the first woman  to Stanford Law School’s regular faculty.

Doesn't it sound like an inspiring read? I'll report back with a review, but thought some of you might like to add it to your summer reading list and read it along with me.

This book is on my summer reading list!  It promises to be an inspiring read.

I love reading stories that has got to do with the history of women in law. They are always inspiring, and talk about the challenges that various women have to face as they overcome prejudices when being a lawyer in a male dominated trade. It constantly reminds me of the hurdles that I have to face on my way to becoming a good lawyer.
Mariov