Ms. JD is Recipient of Prize Money from First Women in Law Hackathon! 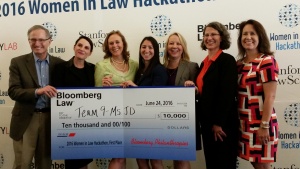 On June 24, 2016, Ms. JD Immediate Past President Katie Larkin-Wong served as an advisor for the winning team in the first ever Women in Law Hackathon, a Shark Tank style pitch competition.  Created by The Diversity Lab, helmed by Caren Ulrich Stacey, hosted at Stanford Law and sponsored by Bloomberg Law, this competition included team participants and advisors from 54 law firms and diversity focused organizations.  Nine teams pitched ideas to a panel of judges on what can be done to increase retention of women in the law. Each team designated a nonprofit organization that would be awarded its prize money, all of which was donated by Bloomberg Law.

The winning pitch was made by Team 9 and the team designated Ms. JD as the recipient of the $10,000 first prize award.  The team’s pitch centered on a phone app that uses “SMART” (Solutions to Measure and Retain Talent) categories to keep track of attorneys’ advancement, particularly in areas in which women often do not receive credit such as firm administrative work and mentoring.  The app allows users to track their work in areas such as pro bono, client development and external visibility.  Users are able to track their development in real time and compare it with other attorneys at their firm.  This structure allows attorneys to make adjustments and improvements on a rolling basis instead of waiting for feedback on an annual review or not receiving any feedback, an issue of concern for women lawyers that several of the teams addressed.

As the recipient of the first prize money, Ms. JD will be working to implement ideas derived from the hackathon.  Stay tuned!

You can find more coverage on the innovative ideas presented at the hackathon in Bloomberg Law (here and here), Law360, bizwomen, The Recorder and Stanford Law.