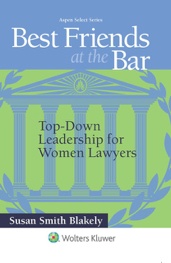 The most recent example of women lawyers speaking out against inequality is the employment discrimination suit filed this week by a group of women lawyers at Morrison Foerster alleging that they were discriminated against after taking maternity leave.  Their suit is styled as a $100M putative class action, and they have retained the same law firm, Sanford Heisler Sharp, that got the $3M settlement plus $1M in attorneys fees against Chadbourne & Parke (now Rose Fulbright) in a gender discrimination suit under the Equal Pay Act recently.  So, hold onto your hat.  Here are the details.

After reporting recently in this blog about the Yale Law School's 2018 list of female-friendlylaw firms, it looks like there might be a reason why Morrison Foerster (MoFo) should nothave made that list.  Although MoFo claims to have family-friendly policies, the law suit alleges that women lawyers who took maternity leave were delayed in pay and advancement opportunities following their return to work.  The complaint alleges that one of the plaintiffs was warned against taking maternity leave when a partner told her that "parents tend not to do well in this group."

A lawyer at Sanford Heisler Sharp summed up their clients' claims this way:  "MoFo's employment practices perpetuate the 'good old boys' club culture that has dominated law firms for decades."  She further stated that practices like those alleged in the lawsuit hold women back and promote damaging stereotypes of women in the legal profession.

As pointed out by Vivia Chen in her article today in the American Lawyer, "Are Women in Law Finally Empowered to Speak Out Against Inequality?," it is possible that the #MeToo movement may embolden women to bring these kinds of suits against their employers, but there is a difference between the "sexy" suits alleging gender discrimination and the "not-so-sexy" suits based on employment discrimination.  Yes, it may sound like it is all part of one ball of unequal wax, but, practically speaking, that may not be the case.  Until now, it seems that some gender issues have been more equal than others.

However, as the Chen states, the number of Big Law partners, who have been dismissed by their firms for alleged sexual misconduct (at Baker McKenzie, Mayer Brown and Latham Watkins, for instance), is on the rise and evidences willingness by law firms to cut ties with some of the Old Boys to avoid lawsuits.  These recent developments may  provide a real source of hope for equal treatment for women lawyers in law firms.

Hitting law firms where it hurts and negatively affecting PPP after pay-outs from big settlements and plaintiff's verdicts may be the biggest weapons women have.  In her article, Chen quotes Jodi Hersch, a professor at Vanderbilt University Law School, as saying that businesses haven't been motivated to fix harassment problems because they haven't paid a high price for them. Roberta Leibenberg, former Chair of the ABA Commission on Women in the Profession, also is quoted in the article as saying that the harm to reputation is a major concern that law firms have to consider if they continue to be vulnerable to claims of gender discrimination.

It will be interesting to see how all of this plays out.  One thing we know for sure, however, is that doing the right thing cannot compare with the profit and reputation motive where law firms are concerned.  It never has.

Ms. Blakely frequently speaks at colleges and universities, law schools, law firms and law organizations, and she has been featured in media including Corporate Counsel Magazine, the LA Daily Journal, National Jurist, Washington Examiner Newspaper, Forbes Woman, Women Lawyers Journal (NAWL), Law.com, DC Spotlight, Lawyerist.com, Daily Muse, Lawyer and Statesman, Law.com and Huffington Post Business.  Ms. Blakely also is a frequent guest speaker and panelist at conferences on women's issues in business and the law profession, and she has been a featured speaker at the US Department of Justice, Civil Division.  She is the recipient of the Ms. JD 2015 "Sharing Her Passion Award" for her work on behalf of women in the law, and she is the recipient of a Lawyer Monthly Women in Law Award 2016.