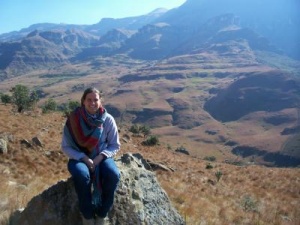 I have less to say about work this week as last week was kind of thin. TP gave us Friday off because it was Independence Day, which we celebrated with a an American pot luck, then we had Monday off because his fiancée was coming back from Taiwan, where she had been living for the past two years, then we worked Tuesday, Wednesday there was a national strike over petrol prices, we worked Thursday, and then left Thursday night for Lesotho so we didn’t work Friday.

I will update soon about work- Susan and I are working on an interesting property case, starting on an HIV negligence case and continuing work on a medical malpractice case. I know I kind of glossed over this, but I want to talk about my weekend first and then will update on the work stuff. But last weekend was one of the coolest weekends of my life and I think I should share it.

We all took a trip to last weekend. For those of you who don’t know, is a country entirely landlocked by . Now I thought to myself when I heard of this place, “This can’t be that different from .” I was told the landscape was different, but figured culturally it would be very similar. I couldn’t have been more wrong.

We took a shuttle bus up to the , which is one of the ways to get into and stayed at a lodge full of backpackers. The first night was pretty uneventful, but full of anticipation. The next day we got up, ate a good breakfast (I have eaten more eggs here then at any point in my life) and then head off.  We met our guide, Matthew, who turned out to be crazly (the good kind of crazy at least) and piled into a Land Rover with pretty much no idea what lay ahead.

We got to ride through the , which were incredibly beautiful. It was scenery like I have never seen before. Apparently they were the inspiration for JRR Tolkien’s Lord of the Rings, which was totally believable. The drive was pretty long and full of bumps and winds and views and photo-ops and laughs. We finally crossed into , and everything changed.

It’s called the “kingdom in the sky.” It has the highest low point of any country in the world. It’s all mountains and beautiful scenery. It is still basically untouched by the western world. We got a little lesson on the way there about the culture of . Boys leave home around 13 or 14 and become shepherds for the village flocks and then eventually go back to their families. We saw shepherds all over the place, some of whom Matthew knew personally. Many of them asked us for candy because apparently missionaries (the country is almost 90% Christian) used to give them sweets and tourists have continued the tradition. Matthew declined and we had a discussion about how demeaning that relationship is to their culture as it turns them into beggers. We all agreed with his sentiment, although it did make it a bit awkward when we stopped along the road and children would ask me for things through the window and I just had to sit there and continually say no.

Families live in homes called rondavals- circular homes made of stone with thatched roofs. They traditionally don’t have windows although we were told that they started putting windows in them because it was a “western fashion.” They are heated with the smoke from a fire. Unfortunately the one we stayed in did not have a fire. We all slept in a big pile with not nearly enough blankets and froze our buns off. We also went to bed quite early as it was pitch black and there was nothing to do because we couldn’t see. But we had a good time anyway playing mafia by candlelight for a while.

Most of the time was spent pony-trekking. We went through the countryside traveling through small villages where children would run out to greet us and going up and down cliffs I couldn’t believe ponies could climb. There are no words or photos that could do justice to the landscape. Hills upon hills and fields dotting the landscape with small villages and flocks of various animals roaming about under the watchful eye of a shepherd.

We wanted an authentic experience and we certainly got it. I didn’t shower for 4 days or brush my teeth for 2. I sat with locals to whom a bunch of white Americans were a novelty as they see so few of us and drank their local beer and laughed. I watched as one of my traveling companions took pictures of children and then listened to them scream as she showed them the photos on the digital screen- only after a while did I realize that these children rarely see themselves as they have no mirrors or standing water around and no photographs. It was cool. It was so cool. And you can tell from how scatterbrained this post is that there is so much emotion and excitement wrapped up in last weekend. It was amazing. Just amazing.