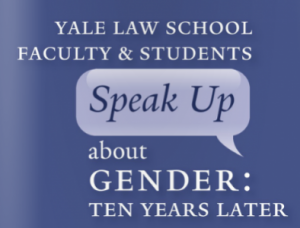 In 2002, Yale Law Women (YLW) published Yale Law School Faculty and Students Speak About Gender: A Report on Faculty-Student Relations at Yale Law School. Expanding on several earlier YLS studies of gender dynamics during the 1980s and 1990s, the report noted progress toward gender equality within the law school, identified areas for future improvement, and started a dialogue between faculty and students about these issues.

In 2012, YLW launched Yale Law School Faculty & Students Speak Up About Gender: Ten Years Later, a follow-up report on how gender dynamics have changed at Yale Law School over the last decade. The data collection began in fall 2011 and was released this month.

This latest iteration of the Speak Up report synthesizes findings from three data sources: one-on-one hour-long interviews with 54 faculty members, observations of student participation rates in 113 class sessions in the fall of 2011, and nearly 400 anonymous student survey responses.

YLW found that men continue to participate in class more than women, at an almost 60/40 split. If the 2002-2012 rate of improvement (1.5%) continues, the gender gap in class participation at YLS will not close until 2083.

Of course, speaking in class is just one proxy of success and fulfillment in law school. But the gap goes beyond classroom participation. Men are more active in engaging faculty outside of class and are more comfortable doing so. So it is unsurprising that men are more likely to write with faculty, and earlier—and they learn about faculty opportunities through more informal channels than women do. Faculty members observed that women are more hesitant to ask professors to advocate for them.

Student publishing does not escape this gender gap, with women authoring just 25% of student Notes published in The Yale Law Journal over the last three years.

And the gap continues beyond law school to job prospects. The study shows that male students secure clerkships—particularly appellate and Supreme Court clerkships—at a disproportionate rate.

But not all of our findings are bleak—some reveal noteworthy progress. For instance, women hold the majority of research and teaching assistant positions for professors whom we interviewed. There has been improvement in the last 10 years, though progress is slow. This study in no way singles out Yale Law School as the sole or worst offender in terms of gender disparities. In fact, many interviewed professors said that Yale is one of the better places within legal academia for women students. If Yale is one of the best environments for women, and the disparities are still so great, then we must take a closer look at how we can improve gender dynamics to ensure that all students are able to thrive at law school, regardless of gender.

There is more nuance to the findings than can be reported here. For a more complete discussion of the insights generated by the study, you can download the full report here. Additionally, over the next week, more posts will delve into the findings regarding classroom dynamics, patterns beyond the classroom, recommendations, and broader implications in separate posts on Ms. JD. Look for these posts in the coming days.