Yale Law Study on Gender from the Professors’ Point of View 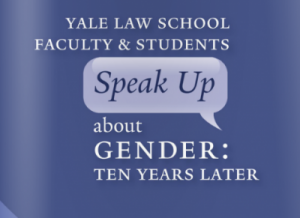 This is the third post in a series about Yale Law Women’s study, Yale Law School Faculty & Students Speak Up About Gender: Ten Years Later. The second post examined the results of classroom observation. Student volunteers interviewed 54 professors (out of 83 professors contacted). Fourteen were women professors and forty were men professors. Each professor spoke with a student one-on-one for an hour regarding his or her views on gender dynamics inside and outside of the classroom and beyond law school. The interviews revealed significant differences between women and men faculty. Below are the major findings based on the professor interviews.

And lastly, almost every woman professor had well-developed views of mentoring and had clearly thought much about her role in mentoring. While some men professors also had thoughtful views about mentoring, a large proportion said they never gave it much thought.

These findings point to the importance of faculty diversity and particularly to increasing the proportion of women faculty. Our findings indicate that women professors relate differently to students, in a way that seems to benefit women more. However, although the current student body is close to 50/50 for men and women, the Yale Law faculty is far from 50/50 (in the 2011-12 school year, 21.2% of faculty were women). As a result, the current women professors are bearing a disproportionate burden of advocacy and mentoring for students.

Thank you to the Board of the Speak Up Study for their contributions to this post.