Your Brain, Law School, and Law Practice: Are You A Reliable Narrator? 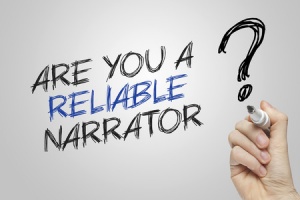 I am a fan of mysteries.  So armed with this information, it may not surprise you to learn that I enjoyed Gone Girl (both book and movie).  For those who missed this mega seller, I do not think it is giving away too much to tell you that both Amy and Nick – the main characters - are “unreliable narrators.”  Although you usually trust the person telling the story in a book, a talented writer can successfully both trick and entertain the reader by breaking this convention.

The writer of Gone Girl dropped enough hints along the way to make even the most gullible reader eventually catch on that Amy and Nick were not dependable as reporters of their circumstances.  Now it turns out that both of them had some deep psychological issues, and I do not want to take this comparison too far.  But, in a sense, we all are unreliable narrators of our life stories, even if we are not psychopathically delusional.  It is useful to understand why so we can be appropriately skeptical of the tales we tell ourselves.

Understanding the Roots of Our Occasional Unreliability

I have talked about a few cognitive biases in past columns that can be especially harmful in the practice of law.  For example, one post considered the confirmation bias.  We diligently and methodically search for information to confirm our decisions more than we ever search for information to help us make a decision.  That is because we are usually leading with our gut, and justifying that reaction.  My goal is not to depress you about the glitches in human thinking, but to encourage skeptical thinking.  Lawyers need to be aware of these biases in decision-making in order to predict and persuade decision makers.

Your Brain as the Universe The availability bias is this tendency to estimate the probability of an event based on how easy or difficult it is for us to imagine the event occurring.  When an event occurs frequently, it makes sense for the brain to remember it and unconsciously consider it the way of the world.  From an evolutionary standpoint, our ancestors benefitted from having vivid memories of any predators lurking in their backyard, inducing a cautionary approach rather than a carefree one in exploring their surroundings.

“We don't see things as they are, we see them as we are.” - Anonymous

But our own frequent and sometimes vivid experiences – imprinted on our brain - can be occasionally misleading when we use them to judge how the world generally operates.  Bombarded with commercials of lucky lottery winners, we may wildly overestimate our own chances of winning Powerball.  Strangely enough, lottery operators do not publicize the millions of losers in the lottery. [See John Oliver’s story here.]

So too, if your news feed is full of stories about a plane crash, you may be queasy about boarding a plane.  If you drive a fair amount, car crashes are far more likely to occur, but you probably do not give it a second thought as you zip down the highway at a high speed past texting drivers.

Your brain is constantly filling in gaps in your understanding of the world by retrieving your own experiences.  With knowledge of this availability bias, we should be cautious of making decisions that draw on our anecdotal experience or gut feelings versus data, studies, and other hard evidence.  Whenever you hear a justification in the form of a “story,” it can have a powerful effect (especially if we are seeking information to rationalize a particular result.)  Anecdotes are not data and your experience may be limited.  Until you see the study confirming a correlation, remain skeptical.  (Although I have to admit that I am still flossing despite the apparent lack of evidence of its efficacy.)

Beware of the Invisible Evidence in Your Case

So you have to be skeptical of drawing conclusions based on your experience, as your experience may not be the norm.  But that is the easiest part (and it is really not that easy.)  As a lawyer, you have to be wary of clients, judges, witnesses, police, and opposing counsel who continually (and often mistakenly) rely upon their own experience for their decisions.  Much of the law is indeterminate and plays into this bias.  Asking, for example, how a “reasonable person” would act opens the door to the decision-maker (sometimes unconsciously) hauling out their own experience with the world as evidence – evidence not subject to review or cross-examination.  Remember, we use the information most available to our recall, even though that information may not be representative of reality.

The availability bias may limit or overwhelm one’s perception of a problem like race or gender discrimination, depending upon whether or not one has experienced it.  If a judge never felt discrimination in their life, maybe they are less likely to believe that it existed in the workplace for the plaintiff.  In each case, a good lawyer has to assess those perspectives as much as you evaluate the strength of the law and facts, gauging other people’s perceptions of the world.

The Chief Justice Has Never Been Pulled Over for a Traffic Stop?

Consider a recent case, Rodriquez v. United States, involving whether police may constitutionally extend a traffic stop to get sniffing dogs on the scene to determine if there might be something else to ruin the driver's day.    In the argument, Justice Roberts reveals his inexperience with police stops while Justice Sotomayor reveals she has some experience getting pulled over.  Such experience could influence their view of a “reasonable” time to wait under the Fourth Amendment after you have gotten your ticket:

Justice Sonia Sotomayor: “Chief, I’ve been stopped…[and] keeping me past giving me the ticket is annoying as heck." As a lawyer, you have to be wary when these decision makers fill in the blanks with their own experience.  That means recognizing that they bring a unique perspective, one that you may not possess, but one that needs to be considered as carefully and fully as the legal rules in the case.