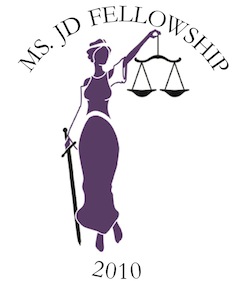 Ms. JD has awarded Fellowships to 20 rising third year law students. Fellows were chosen from among over 300 applicants representing 75 law schools. Fellows were selected based on their academic performance, leadership, and dedication to advancing the status of women in the profession. Among the winners are law review editors-in-chief, published scholars, and future judicial clerks. The winners reflect a full range of diverse interests and backgrounds, with women pursuing opportunities in public interest, academia, and private sector in every region of the country. More than half of the recipients come from groups that have traditionally been underrepresented in the legal profession: women of color, working mothers, and recent immigrants. The 2010 Ms. JD Fellowship Winners are:

Ms. JD created the Ms. JD Fellowship in order to promote mentoring and professional development for future female attorneys. This inaugural year coincides with the 20th Anniversary of the ABA’s Margaret Brent Awards. In addition to receiving financial support and invitation to ABA and Ms. JD events, each Fellowship winner is being paired with a mentor chosen from among the Brent Award Winners. Participating mentors include:

The application process for the 2011 Fellowship will begin in Spring 2011.  Inquiries may be directed to Fellowship@ms-jd.org.

Alexis graduated with a Bachelor of Science in Psychology and a Bachelor of Arts in Sociology (Criminal Justice concentration) in the spring of 2007, where she was an active member of the Victim Assistance Team and a tutor in the Triunfo/Triumph Tutoring Program. Following graduation, she served a one-year term as an Americorps VISTA volunteer in San Mateo, California, where she developed and implemented capacity-building strategies and conducted outreach for an incentive program that promotes professional development and higher education for Early Childhood Educators. Now at the University of California-Davis School of Law (King Hall), Alexis is the Recruitment and Retention Co-Chair of the La Raza Law Students Association and a member of UC-Davis Law Review. Alexis plans on practicing Labor and Employment Law and will be working at the Employment Law Center in San Francisco during the Summer 2010 as part of their disability rights program which seeks to provide legal representation to low-income persons with mental disabilities who experience stigma, prejudice and discrimination in the workplace.

Jacqueline de Armas is a graduate of Princeton University with an A.B. in Philosophy and is currently pursuing her J.D. at Stanford Law School. She has summered at the Department of Justice, Office of Tribal Justice and the Mills Legal Clinic, Stanford Supreme Court Litigation Clinic. Summer 2010 she will be a summer associate at WilmerHale as well as Sonosky Chambers, Sachse, Enderson & Perry, LLP. Prior to law school, Jacqueline was a Program Associate at the Policy Research Center of the National Congress of American Indians.

Martha Goodman is a student at Georgetown University Law Center where she serves as the Managing Director of Barristers' Council and a Notes Editor on the Georgetown Journal of International Law.  Martha is currently a summer associate at Covington & Burling in Washington, DC and interned for Judge Henry H. Kennedy, Jr. at the U.S. District Court for the District of Columbia last summer.  Before law school, she served as a policy advisor to Congresswoman Louise Slaughter and also volunteered in Madagascar.  Martha enjoys cooking and cycling.

Lauren Groth is a second year student at the University of California-Berkeley School of Law. She is a Notes & Comments Editor with the California Law Review and a recipient of the Berkeley Human Rights Center Fellowship, Herma Hill Kay Fellowship, and Equal Justice Works Summer Corps Fellowship. She is interested in legal issues related to women's rights and forced migration, and has spent her summers with the Women's Refugee Commission and Tahirih Justice Center.

Lauren received her B.A. with honors from Northwestern University in 2005 and was the recipient of a Rotary Ambassadorial Scholarship to South Africa where she received her M.A. in International Development Studies from the University of Kwazulu-Natal in 2008. Prior to law school, Lauren worked as a research consultant in South Africa, and as a project manager at Kala Refugee Camp in Zambia.

Anja Havedal is a third-year JD candidate at Columbia Law School, and is also pursuing an LLM in International Criminal Law at the University of Amsterdam. Prior to law school, she  spent two years working at a policy research institute in Afghanistan, and four years on the editorial staff of the Journal of Democracy in Washington, DC. Originally from Sweden with Polish roots, Anja is the recipient of a Soros Fellowship for New Americans. She intends to pursue a career in environmental and international law.

Katie Hayes is a rising 3L at Northwestern Law School where she serves as the Managing Editor of the Northwestern Journal of Technology and Intellectual Property. Katie has also been involved in the Women’s Leadership Coalition and the Student Bar Association at Northwestern and the Student Bar Association and the Equal Justice Foundation at Georgetown University Law Center where she completed her first year. Katie holds a dual major in psychology and government from Claremont McKenna College and, prior to law school, worked for Verizon’s Corporate Counsel on antitrust and intellectual property matters. During the summer of 2009, Katie interned with the Honorable Judge Robert Patterson in the Southern District of New York. This summer, Katie will be a Summer Associate in Latham and Watkins’ San Francisco Office.

Emily Hoort is a rising third-year student at Harvard Law School.  She graduated with a B.A. in Spanish and Latin American Studies from Emory University.  Emily is spending the summer splitting between the law firms of Alston + Bird LLP in Atlanta and Varnum LLP in Grand Rapids, Michigan.

Niji Jain is a Woodruff Fellow at Emory Law School. She graduated from Stanford in 2008 with a major in Human Biology and a minor in Spanish. Niji plans to pursue a career in public interest when she graduates. She came to law school after spending much of her time in college volunteering with domestic violence survivors. She has spent most of her summers working with domestic violence victims in English, Spanish and Hindi, in the Bay Area, Atlanta, and New York.

Nicolle Kownacki is a student at UCLA School of Law, focusing on both international human rights law and international arbitration.  Prior to law school, Nicolle attended Georgetown University and worked for several years at the U.S. Department of Justice, Office of International Affairs, in the Criminal Division. Nicolle spent a semester of law school doing an internship at the International Criminal Tribunal for the former Yugoslavia, in the Hague, Netherlands, and she is currently a summer associate in Washington, DC, at the law firm, White & Case.

A native New Yorker, Jenny Ma holds a B.A. with honors from Wesleyan University, a M.A. from Columbia University's Graduate School of Arts and Sciences, and is currently a rising 3L at Columbia Law School.  This year, she will serve as Managing Editor of the Columbia Journal of Transnational Law, in which her Note on a Korean labor statute's affect on the female workforce won the Outstanding Note Award.  Jenny is also the Alumnae Chair of the Columbia Law Women's Association, on the Moot Court Board, a Teaching Fellow to the First Year Writing Program, and thrilled to be a Ms. JD Fellow.

Epiphanie is originally from El Paso, TX and did her undergraduate work at Amherst College in Amherst, MA.  Before attending the University of Texas School of Law, she spent two years in New York City working as a Litigation Case Manager for Cravath, Swaine & Moore.  Epiphanie is the current Development Director for the Texas International Law Journal and a member of the Chicano/Hispanic Law Students Association and the Women's Law Caucus. 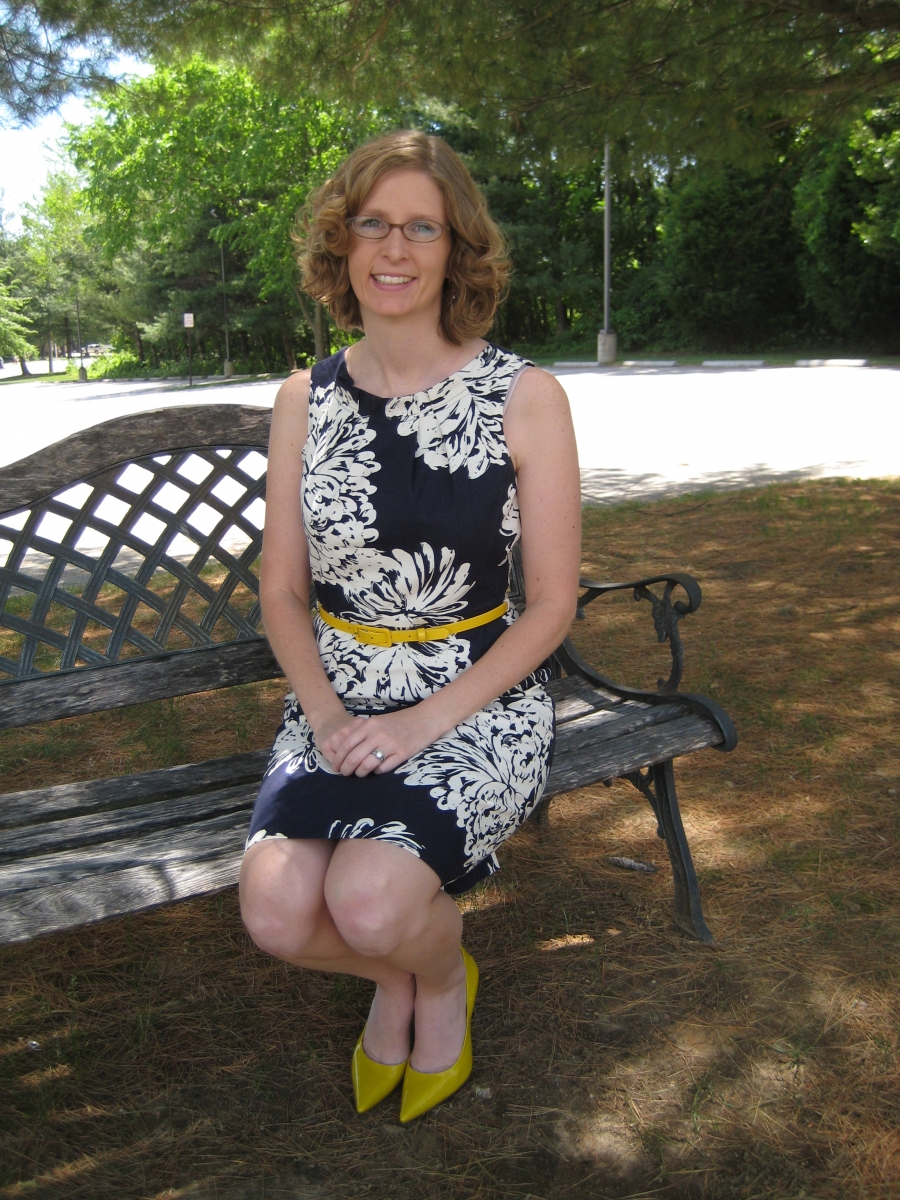 Megan Kennedy Scanlon received her B.A. in American Studies and Music from the College of William & Mary in 2004. Following college, Megan received her M.A. in American Culture Studies from Bowling Green State University. Her master’s thesis focused on women’s health legislation during the early 1990s. While in graduate school, Megan recorded a CD with the Bowling Green Philharmonia, worked part-time at the Center for Choice in Toledo, and served as assistant editor of the Women in Sport and Physical Activity Journal. Prior to law school Megan worked as a National Park Service park guide, a whitewater raft guide, and a paralegal at Hunton & Williams LLP. Currently, Megan is completing a Law, Science, and Technology Certificate at the Sandra Day O’Connor College of Law at Arizona State University. Megan is also a member of the Pro Bono Board, a Student Ambassador, Editor-in-Chief of Arizona State Law Journal, and immediate past president of the Women Law Students’ Association.

Rachel is a rising third year student at Pace Law School in White Plains, NY and will be working as a summer associate at at Cohen and Wolf, P.C in Bridgeport, CT.  She remains actively involved at Pace where she is the president of the Women's Association of Law Students, research assistant for Professor Bridget Crawford, student editor on the Journal on Court Innovation, a student attorney in the Honors Prosecution Externship, and past student attorney in both the Family Court Legal Program and Pace Post-Conviction Project.  Rachel has also worked as a paralegal in the New York County (Manhattan) District Attorney's Office and as a judicial intern for the Honorable Joan Margolis, U.S.M.J.

Eva is a native of Coral Gables, Florida, and graduated from Harvard University, where she received a Bachelor of Arts in Government and a foreign language citation in French.  Before law school she worked for Walt Disney Imagineering in Orlando, Florida, helping to complete a brand new multi-million dollar theme park attraction from the demolition stage through grand opening.  She is currently a rising 3L at the University of Miami School of Law, where she serves as an Articles and Comments Editor for the Miami Law Review and a member of the Moot Court Board.

Keerthika Subramanian is a rising 3L at Yale Law School in the Class of 2011 where she focuses on corporate law with a keen interest in the pharmaceutical and financial services industries. As a 1L, she received the extremely

competitive Olin Law & Economics Summer Fellowship. She used the fellowship to conduct a finance event study on the effects of FDA pre-emption on pharmaceutical shareholders.  As a 2L, she received the highly selective FASPE Fellowship to study corporate responsibility practices in Germany and Poland. She also received a coveted summer associate position at the top international law firm, Sullivan & Cromwell. In addition to her academic pursuits, Keerthika co-chaired the Yale South Asian Law Students Association  (SALSA) and served as a networking chair for the Women of Color Collective. Keerthika hopes to pursue a career in corporate law immediately after graduation. She eventually would like to serve as general counsel in a top Fortune 500 pharmaceutical or financial services company. Prior to attending Yale Law School, Keerthika graduated summa cum laude and Phi Beta Kappa from Emory University in three years where she was a John Emory Merit Scholar. As an undergraduate, Keerthika served on a five member international delegation to Nigeria with President Carter's NGO, published a peer-reviewed public health study, developed a women's healthcare model for the US Veterans' Affairs Department, and was named a 2008 Rhodes Scholarship Finalist.

Lilia Toson-Dysvick is a student at New York University School of Law, where she is an Articles Editor of the Law Review and an AnBryce Scholar. Ms. Toson-Dysvick's legal interests include litigation and criminal defense, and she is planning on pursuing a judicial clerkship after graduation. She holds a Bachelor of Arts degree in Political Science from William Jewell College in Liberty, Missouri.

A native Southerner, Sofia Vickery attends law school at Northwestern School of Law in Chicago, where she is Managing Editor of the Law Review. Prior to law school, she worked in government consulting in DC. Sofia is a 2006 graduate of Georgetown University, where she majored in International Politics.